THE ZACHT IS BACKT 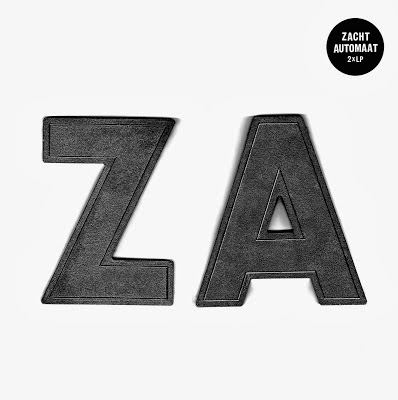 Almost exactly a year ago we released a 2xLP compilation featuring the best on tap from strange-music-overlords ZACHT AUTOMAAT. The first edition was in a pressing of 333. It sold out very quickly.

We now have a 2nd press, in a limited hand numbered edition of 222. Don't wait, this thing is a monster.


'It is all too rare to hear a band like this, literally bursting at the seams with ideas. Zacht Automaat, the Canadian duo of Carl Didur and Michael McLean, have released an astonishingly diverse and kaleidoscopic array of music across eleven (!) albums in the past three (!!!) years, of which this gorgeously presented set distills the best two LPs worth of sounds. But even that abbreviated amount of music is almost impossible to encapsulate, filled as this record is with tape loops, cosmic workouts, lo-fi dirges, loping exotica-ish patterns, tuneful synth bliss, and modal psychedelia. They've clearly taken a page from Krautrock pioneers Faust, particularly the masterpiece that is Tapes, and let their imaginations and musicality run rampant. This is the best kind of totally listenable experimentation we can always get behind here, and the sounds they conjure hark back to so many long-time Other Music favorites it practically has us giddy, from Can, Cluster, Black Dice, Stereolab, Soft Machine, the Finnish psych underground, the Ghost Box roster, Bruce Haack, and Raymond Scott to a myriad of other brilliant artists we've championed over the years, while still managing to retain a distinct vision and voice. Yes, we realize we're asking you to fork over nearly $30.00 for a double LP from a band you've probably never heard of, but mark my words, you will not be disappointed. Limited to 333 copies, we have a small quantity available, and they most likely will not be coming back.' - Other Music

Next up, please check out the superb I CAN FEEL THE MOLD IN ME from Canadian duo Zacht Automaat, which brews up some well-stewed W. Coast Sandozian freakout, plenny of nightmarish J. Meek and channels some tremendously mucky sub-‘Ultima Thule’ T. Dream motorik clatter, and all o’this via found sounds, berserk organ’drum duels and peak periods of Bavarian Knees-up. Imagine Holger Czukay and Uwe Nettlebeck constructing a mash-up LP from early German jazz, TV themes and Soft Machine out-takes and yooz close to hitting these druids’ pleasure centres, who (I must add) never outstay their welcome, each sonic foray involving audacious opening moments then fucking off right quick like. It’s a canny approach that leaves listeners still requiring more more more. - Julian Cope

'Multi-instrumentalists Carl Didur and Michael McLean share a long, intertwined history that stretches into the deepest depths of the Toronto and Hamilton underground rock scenes, including stints in momentary buzz bands (No Dynamics R.I.P.) and recurring gigs backing up Damo Suzuki of Can. But in just three years as Zacht Automaat, the duo have charted an equally convoluted course, pumping out no fewer than 11 releases—online or on cassette—of science-lab psychedelia. Their output forges a lineage of organ-tweaking freakiness that connects the earliest odysseys of Pink Floyd to ’70s Krautrock iconoclasts to modern-day mindbenders like Oneida, Caribou, and The Flaming Lips. Though all of Zacht Automaat’s music can be easily accessed by anyone with a couple of hours to kill on Bandcamp, this self-titled, double album–length collection provides a much more convenient point of entry into their hermetic sound world. This is no mere compilation of “hits,” mind you—it’s a two-hour crazy-quilt patchwork that savvily stiches together choice excerpts from much lengthier pieces into a brisk-paced, constantly mutating mix, like some avant-garde answer to Stars on 45. Their work encompasses intermission music for hockey arenas on Saturn (“Don’t Worry It’ll Be Future”), acidic psych-jazz splatter (“A Trip to See McLean on Holidays Pts. I, II & III”), and the most blissfully epic, otherworldly tribute to a Steeltown suburb ever (“Ancaster Heights”). In every instance, Zacht Automaat’s dizzying instrumentals emphasize the joyful, inclusive qualities of free experimentiation without teetering into indulgence, and the anarchic thrill of colouring outside the lines while still paying respect to those who laid down
the rules.' - The Grid (R.I.P.)

'Walk through the luminescent sliding doors and feel the weight evaporate from your body. Step through the archives of time and look out at the glass walls that hold back the drifting stars. Notice the spectral starships crossing paths in the distant view. The cosmic residue of their flight path carries waves of sound as they intercept the room’s speaker system. A digital screen scrolls like a conveyer belt filled with passing phrases, “Ancaster Heights”, “The Smiling Wilderness”, “Disturbed Ground’”, the script runs endlessly. The words are given meaning as each wave grows to an audible strength. On the outside, the distant vessels can be seeing touching down near foreign embassies, welcomed by euphoric sounds. The speculation is confirmed. Our own takeoff has begun, bound for the farthest reaches of these celestial zones. Set yourself free and take in the spectacular view.

This collection is a bag of magic borrowed from the enchanted hands of a band that evades hyperbole. Veterans of the interstellar scene, Carl Didur and Michael McLean have parsed the cryptex of popular music and entered into a new dialogue as Zacht Automaat. Adopting new methods and strategies, they have sewn together opposing forces before pulling them apart again to see all the pieces in a different perspective.
Through three years and 11 albums, ZA have melted countless minds and challenged the strength of an equal number of hard drives. Running in at around 80 minutes, this monolithic double LP and bonus CD nevertheless stands in a much bigger pool of music that is no less crucial. Those lucky enough to still find copies of the early Medusa tapes should not resist the urge to grip. Each album is a new zone to explore and this release should be considered the official tour for prospective visitors. Many thanks are owed to Calico Corp. for giving these songs the treatment they deserve.' - Weird Canada